You are here: Home1 / Evaluation 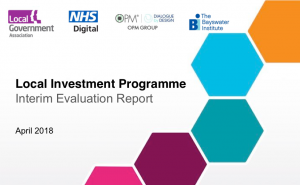 In 2017 the Local Government Association in collaboration with NHS Digital introduced the Local Investment Programme. The programme recognised that the imperative for local care services to transform has never been greater due to rising needs, citizen demands and expectations alongside sustained pressure on resources. Although technology will never be a replacement for the delivery of care it can, if used appropriately, support people to live at home for longer, enable professionals to work more effectively together and help commissioners target services where they have the greatest impact. The Local Investment Programme (LIP) supported transformation through one-off local investment funding of up to £50,000 for projects that seek to use information and technology to improve adult social care and health outcomes and deliver financial savings as well as supporting more resilient care services and in improving outcomes, including people’s experience of care.

The programme was underpinned by a number of key principles:

It was expected that the outputs and learning from these projects would be reusable and replicable, enabling them to be shared and implemented widely across the sector.

Councils who were successful in their bids for funding received support from an external partner organisation to help evaluate benefits, capture learning and support dissemination to assist other local areas. Participating local authorities were required to actively support this work, over the course of the programme, including in the development of guidance and tools for the sector.

The Bayswater Institute and OPM Group (now Traverse) were successful in winning the opportunity to evaluate the 19 technology interventions funded by the programme. In April 2018 an interim report was produced capturing the learning on the ground as well as considering the programme itself.

Abstract:
Computer systems which support cooperative work will undoubtedly change the way people interact with one another in a working setting. In stimulating these changes, the CSCW system will be a force for organisational change. Over the past twenty years there has been a tradition of impact research, in which investigators have studied the impact computer-based information systems implemented within organisations have had upon those organisations. The results have been many and varied. Some studies show that computer systems lead to the centralisation of power, while others show decentralisation of power. At the level of the individual job there are studies which show the empowerment of the individual and the opposite: the creation of the “white collar assembly line.” A study from 1983 demonstrated both job enrichment and deskilling from two different computer systems in the same organisation. There is widespread agreement that there can be substantial change, but very little agreement on the form that it takes. We have argued elsewhere (Eason 1988) that the reason for these diverse results is that computer systems are not deterministic, and that they can be used to achieve many different organisational effects. There is an opportunity in the design and development process to plan the organisational outcomes and to achieve the impact that is desired by the members of the organisation. 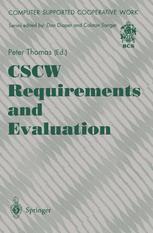 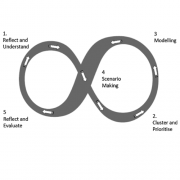 How the Imagine Approach Captures Context and Leads to Sustainability

The Imagine approach is intended to assist organisations and communities of all kinds to improve their long-term sustainability. It provides a rapid means to:

Imagine requires the organisation to invest in no additional capital assets such as software or personnel. It is a facilitated workshop process in which a series of tools are applied to enable local decision makers to map their own context and model sustainable futures. In a series of four half day Imagine events, stakeholders from within the organisation or community come together with a facilitator to engage in the process. Imagine is Rapid, Participatory and Holistic It provides organisations and communities with empowering, evidence-based information … helping them to gain a clear insight into a sustainable future. Rich Pictures (such as seen at the top of the page) are used to map the initial context and amoeba diagrams provide an overview of how things were, are and (importantly) could be. Imagine is not Expert driven, Top down or Exclusive and full of technical language.