Development of ergonomics in the UK between 1956 and 1974

Abstract:
The 1960s represents a key decade in the expansion of ergonomics within the UK. This paper reviews trends and developments that emerged out of the 1960s and compares these with ergonomics research and practice today. The focus in particular is on the expansion of ergonomics as a discipline within industry, as well as more specific topics, such as the emergence of areas of interest, for example, computers and technology, automation and systems ergonomics and consumer ergonomics. The account is illustrated with a detailed timeline of developments, a set of industrial case studies and the contents of important publications during the decade. A key aim of the paper is to provide the opportunity to reflect on the past and the implications this may have for future directions for ergonomics within the UK.

The paper provides practitioners with an insight into the development of ergonomics in the UK during one of the most important decades of its history. This is especially relevant given the fact that in 2009 the Ergonomics Society celebrates its 60th anniversary.

The quote from the Italian writer Italo Calvino was made during a debate held on ‘industry and literature’ at the beginning of the 1960s. Calvino sums up what were to become dominant themes in later accounts of the period, namely, the growth of automation and the increasing role played by technology within society. Both of these themes are important within ergonomics and continue today as sources of debate in research and practical applications of the subject. Similarly, many issues have declined in interest or relevance as compared to 40 years ago. Much has been written about the origins of ergonomics, alongside other discussions centred around pioneers within ergonomics and the future of the discipline (e.g. Frederic Bartlett). By comparison, little detailed information is available covering specific periods within the development of ergonomics. This paper focuses on the 1960s within UK ergonomics for a number of reasons. First, the 1960s can be seen as a mid-point between the immediate post-war roots and birth of ergonomics and its subsequent development into a fully fledged discipline. Second, during the 1960s, ergonomics became firmly established within industry and made firm steps towards closer engagement with civil, government and industrial users and practitioners. The late Brian Shackel (1927–2007), in a paper written to celebrate the 50th anniversary of ergonomics within EMI, viewed the period as a bridge between earlier work on military ergonomics and a later focus on consumer ergonomics in the 1970s.

In 2009 the UK Ergonomics Society celebrates its 60th anniversary. It seems timely and appropriate to stand back and review trends and developments over the period and compare these with present day ergonomics. 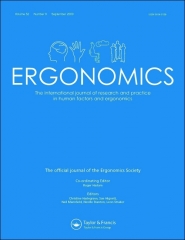